Searching for Havana: An Ice Cream Parlor, A Dive Bar, and Streets That Stink of Onions

It is a typically rainy night in Havana. Taka and I linger near the doorway, out of the rain, of Hotel Sevilla – one of those grand, colonial buildings that Cuba is known for – as Lori, a smartly-dressed young Cuban woman, asks the doormen to direct us to the dining room. Her friends will be performing opera songs for the dinner crowd this evening.

We had thought that her asking would be the easiest way, her being a native speaker, a local, and much more respectable looking compared to my and Taka’s look of general haggardness. But the doormen are rude and dismissive towards her. It seems that they only reluctantly admit her to the hotel, the lobby decorated in a fashion fit for nobility; or, in this case, for foreign tourists. END_OF_DOCUMENT_TOKEN_TO_BE_REPLACED

END_OF_DOCUMENT_TOKEN_TO_BE_REPLACED 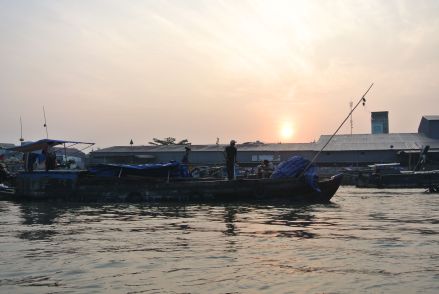 Traveling from Cambodia to Vietnam by bus is like going from Three Oaks, Michigan directly to Times Square without everything between. The minibus is packed with a mix of foreigners with their legs crammed against the seats in front of them and locals. We pick up and drop off several people along the way as the bus swims through a sea of motorbikes like a shark through a school of minnows, honking the whole way.

END_OF_DOCUMENT_TOKEN_TO_BE_REPLACED

Brutality and Peace in Cambodia 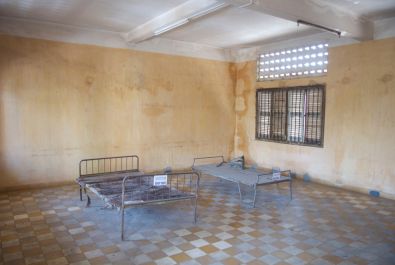 A cell at Tuol Sleng Prison, now a museum, previously a school.

Some of their faces show contempt or rage, others fear or an obvious resignation, while other faces are sadly innocent – a few even have smiles. I look at all the photographs they have of former prisoners at the Toul Sleng S21 Prison in Phnom Penh. Every photograph shows a little bit of humanity: the blind emotions of the children that were taken there, the rage of mothers that have just had their child taken from them, the dread of the old men that know they are doomed. All the heinous acts of torture and murder that were committed at this prison under the Khmer Rouge regime are documented.

END_OF_DOCUMENT_TOKEN_TO_BE_REPLACED

You Are Not a Good Photographer

Inside Angkor Wat at dusk.

It’s pitch black outside but it’s easy to find my way. There’s only one way to go: the same way as the tour buses, vans, and tuk-tuks. It’s before sunrise and we’re headed to Angkor Wat. I arrive by bicycle to the biggest attraction at the Angkor ruins in Cambodia. I had read of people that had seen the sunrise from another ruin so I keep pedaling. After a hundred feet I can’t see my handlebars. I turn back and get a really expensive coffee from the cart out front.

END_OF_DOCUMENT_TOKEN_TO_BE_REPLACED

My skin is red, not from sun, but from dirt. I’m riding through clouds of dust as motorbikes and the occasional truck passes me by, while kids wave to me from the side of the road. I’m on a mountain bike rented from my guesthouse and I’ve been told there are waterfalls around here. With my skin caked in red dirt and the sun beating down I’m having a hard time imagining that there is any water at all in eastern Cambodia.